Starfleet's so-called "court martial bell" is a beautiful prop — not to mention a conversation piece that any STAR TREK fan would love to have on their desk!

Unless you want to fork over almost 300 USD for a new Lions or Rotary Club bell, you'll be relegated to finding antiques at a more reasonable cost, converting and restoring them.

In his article "Ding, Ding! This Court Is In Session", Greg Schnitzer (Co-Executive Producer of fan series Star Trek New Voyages/Phase II) explains exactly what this prop is, and where it appeared in STAR TREK: The Original Series. It's a highly recommended read, and should give you all the information you need for your own happy hunting.

This DAMAGED VINTAGE BELL was found at a great price, and luckily it did not have any custom engraving (as many of the pre-owned ones do):

As a second stroke of luck, the broken piece was the Lions Club ornament on top, which would have been removed anyhow. However, it left behind a ridge of torn metal:

This article will demonstrate the conversion of an antique find into a pristine screen-accurate replica! A new section on the accompanying hammer prop has also been added for 2020.

Before the photo set, let's take a moment to examine Starfleet's protocol on utilising this item, which appears at trials & hearings in four episodes.

From these episodes, we can extrapolate that the bell is a ceremonial "call to order" device at courts-martial wherein an officer is being formally tried on charges (full ceremony at trials would likely be mandated), and on occasion at legal hearings deemed to be of exceptional gravity. In the case of hearings, the added formality may be at the discretion of the presiding officer(s).

In Mr Schnitzer's article referenced above, he rightly points out that:

Additionally, it is not used at the ship's hearing against Harcourt Fenton Mudd ("Harry Mudd") on various charges in “Mudd's Women” [1x03].

These examples are interesting indeed, as we can conclude that the bell's presence or absence in any scene was systematic and not haphazard. Dress uniforms consistently accompanied its on-screen appearances, while there was an absence of such (with the crew in their standard service uniforms) at any hearing where the bell was absent. This indicates a deliberate collaboration between the Properties and Wardrobe departments to create distinct atmospheres of greater or lesser legal ceremony.

In the context of the above logic, the bell's notable absences can be explained:

The bell's absence from hearings is consistent with scenarios from the "real-world" legal system – such as out-of-court examinations or pre-trial conferences – that are designed to examine a matter in dispute. These forums are not for judgements or convictions, but to prepare the parties for a pending trial wherein such decisions will be made.

The bell in its initial state, with a broken top ornament that's about to be successfully re-shaped (or messed up beyond all repair) with a Dremel:

Initial rounding of the top ornament completed and showing some of the original bronze underneath:

The partially-disassembled bell, washed & dried and ready for chemical cleaning:

First application of home-made bronze cleaner. Equal parts salt and flour are mixed with white vinegar to form a paste, then brushed on vigorously. Note the substance already turning green as it reacts with the metal:

The promising results of the first application, after allowing to stand for 20 minutes, washing, and drying:

A more generous second and third application of the bronze cleaner follow:

All but the most stubborn patina is now gone, with a known side-effect — the metal has been plated in pink, due to reaction with elements left behind:

A close-up of the top ornament shows the contrast between the "pink-plating" and the original brass underneath:

Further disassembly of the bell and the application of an ultra-fine sanding sponge removes the pink without scratching up the surface (N.B.- even 200-grit sandpaper is too abrasive for this purpose). See the colour shift in progress between the upper and lower rims of the bell:

A sponge scrubbing with Bar Keepers Friend™ and thorough drying has now removed the last of the darkened areas from the visible surfaces of the metal:

To eliminate the scarring left behind by the Dremel, the top ornament is installed into a drill and spun in succession against 120-grit sandpaper, 200-grit sandpaper, an ultra-fine sanding sponge, and fine steel wool, to produce a smooth finish:

The fully disassembled bell, after a penultimate polishing with fine steel wool, and a final polishing with Brasso™ (not pictured) to help preserve the original finish:

One part is added — a thin rubber washer installed between the base and the bell for a firmer grip and less abrasion: 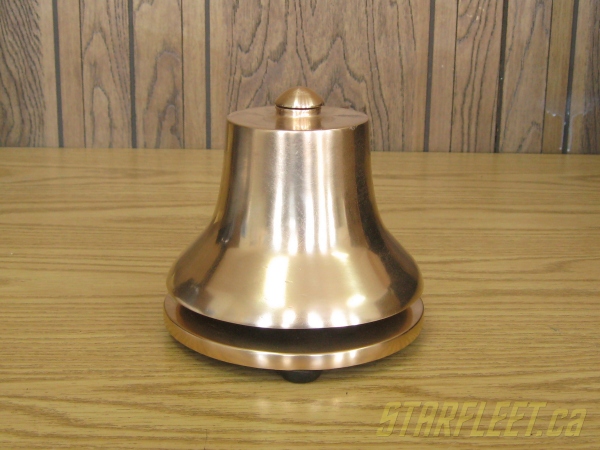 A "Before & After" comparison:

The bell is now ship-shape (no pun intended), but the included hammer is less than screen-accurate: the subject of the next section!

The ever-present wood hammer is the C.M.B.'s "sister-prop", which is (obviously) used for striking the bell.

Here again we find some interesting observations on protocol, but now showing a lack of consistency.

The "call to order" is always sounded using pairs of strikes (ding-ding ... ding-ding ... etc.), and according to Mr Schnitzer's article rings at a perfect E flat. However, nothing can be said with certainty about the number of times the bell is struck, or strangely even the manner in which the hammer itself is used!

In “Court Martial” [1x14], Commodore Stone holds the hammer by the bulbous end, striking three (3) pairs the first time the court is in session, but four (4) pairs the second:

In “The Menagerie, Part I” [1x15], Commodore J.I. Mendez holds the hammer in the same manner as Stone, but strikes only two (2) pairs:

Finally, in “Space Seed” [1x24], Captain Kirk strikes three (3) pairs — but contrary to the Commodores, holds the hammer by its ornate end:

From these, it appears that there is no "customary" number of times to sound the bell; rather, it is used somewhat like a gavel in that the presiding officer strikes the number of pairs he sees fit to gain attention and commence the proceedings.

There is seemingly no good explanation for why the hammer would be held by two different ends. The author will simply observe from his own experience that wielding it Captain Kirk's way (by the ornate end, like a baseball bat) produces a more pleasing sound, and makes the hammer appear less like a handle that has been detached from something (which is what the prop may very well have been)!

In lieu of having any information on the whereabouts of the original hammer used on ST:TOS (if it even still exists), presented herein for props-makers are the dimensions of a finely-crafted lightweight wood replica obtained from Starship Farragut: